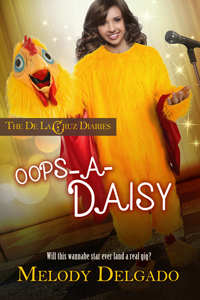 The first book in The De La Cruz Diaries

Sixth-grader, Daisy De La Cruz, dreams of following in the footsteps of her favorite star, Gloria Florez, and becoming the next American singing and acting sensation. She attends an arts magnet school, where she can learn all about her craft by performing in plays and musicals. Problems arise when her beloved music teacher is replaced by a stuffy, opera-singing professor.

Daisy tries to impress him and prove that she is serious about working in the entertainment industry. Then, maybe she’ll earn a coveted spot in his upcoming master class, reserved for the twelve most dedicated students in the school.

She’s already shot a commercial where she dressed up as a shaggy dog in desperate need of a pet mouthwash called STINK-AWAY. Will playing the role of a squawking chicken in another commercial be enough to grab her new teacher’s attention?